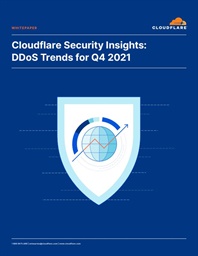 This resource is published by Cloudflare

2021 witnessed massive DDoS attacks that demonstrate a trend of intensifying cyber insecurity that affected a broad range of industries, from tech firms and government organizations to wineries and meat processing plants. The fourth quarter of 2021 capped a record year in terms of the frequency, geographical distribution, and sophistication of DDoS attacks.

Here are some DDoS attack trends and highlights from 2021 and Q4 ’21 specifically:

To learn more about the trends from the last quarter of 2021, download this report.

Please agree to the conditions

By requesting this resource you agree to our terms of use. All data is protected by our Privacy Notice. If you have any further questions please email dataprotection@headleymedia.com.

In order to provide you with this free service, we may share your business information with companies whose content you choose to view on this website.

Distributed denial-of-service (DDoS) attacks remain one of the most effective methods used by cybercriminals to cause significant financial,...
View More
Published: Apr 06, 2022

Cloudflare ranked higher than any other assessed vendor and is named a “Leader” and “Fast-mover'' in the 2021 GigaOm...
View More
Published: Apr 06, 2022

The first quarter of 2022 was predicted to be a busy one for cyberattacks, and recent DDoS attack trends have largely borne that prediction...
View More
Published: Apr 21, 2022